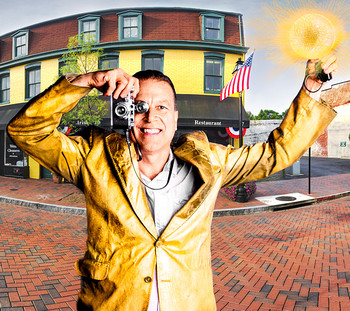 Demetrios N. Fotos, the photographer
The very first photographers would have said that photography captured the light. So all the light goes in a small box, and then, amazing things start to happen. Photography has been my fascination and passion since I acquired my first hand-me-down camera in the seventh grade. I was determined to master the camera from the start. By the time I completed high school, I had won several awards in contests and had professional assignments.

My last name is really, Fotos. My grandparents shortened the name ‘Fotopoulos’ over a century ago to give it a more American sounding name.

There seems to be what one might call a dichotomy in the style that I work; I am both a fine artist and a commercial photographer with works such as wedding photography, portrait photography, as well as commercial and photo restorations. Versatility perhaps and a life of experience and my education in my profession make this possible. When I make a portrait, I am the fine artist and at the wedding, I look for compositional balance and descriptive lighting that will render beauty on to the bride. My craft as the artist is never complete until a fine print is made with all necessary adjustments on the computer to get the image I want and one the client will be amazed by. I make my own prints in-house most of the time. Nearly all my work now is digital, yet, I still use film for special projects or by request. Often, I mix film with digital with special set-ups.

I have an Annapolis photo studio for portraits and commercial projects; and I can take my camera and portable studio set-up to where the session will be.

I have photographed a few well known people: the former US Army General- Colin Powell; Actor Larry Hagman; musician- Bruce Hornsby; Nobel Prize winner- Glen T. Seaborg; writer- Alex Haley; and several senators and congressmen on Capitol Hill, and a lot of adorable babies and children ( who are the most fun to photograph!).

Graduate of The Corcoran School of Art, 1980, with BA degree. I also attended The School of the Museum of Fine Arts in Boston, Tufts University, and studied under, in an in tensive workshop, the wold famous photographer, Lee Friedlander.

After graduation, I took part in the operations of our family restaurant, Dimitri’s LTD., in historic Annapolis in addition to and managing the restaurant’s art gallery. I worked in a photo labs as well as NASA space center’s photo imaging lab and took photo assignments there too. In 1990, I opened my own photo business, Photos by Fotos.


Awards and recognition
2011: Featured artist in the Baltimore Sun and the Capital Gazette for Art Of The Book, a fundraiser for the Mitchell Gallery at St John’s College-

2005: Photography exhibition, Facing The Music, at 49 West Street Cafe and Wine Bar as a part of First Night Annapolis. Over 500 guests attended the opening-
2004: Awarded Best Two Dimentional artwork in Anna Arundel County juried Art Show at the Mitchell Gallery-
1999: Awarded Best Photographic Contribution in the first 10 years of The Washington College Magazine
1998: Photographer of the year, Washington College
1992 and 1993: First place in National Trade Guides for cover photographs
1991: First Place, for Annual Report Cover for The Health Insurance Association of America, in Association Trends Magazine national contest
1986: First Place, in Maryland State Parks photography contest
1980: First Place, In The Art Directors Club of Washington DC ’s The Real Show, a regional student competition in photography and graphic design
1976: Photograph selected from a student show at The Boston School of The Museum of Fine Arts, for the Museum’s student collection.